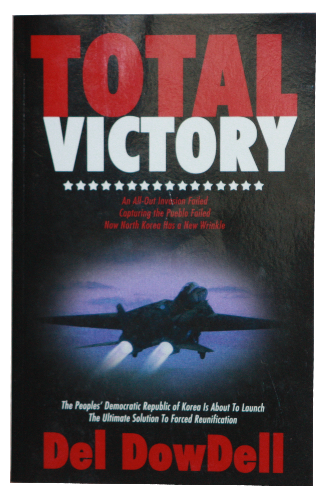 Faced with buckling under to the U.S. and the U.N. demands for on-site inspections of their nuclear facility, North Korea threatens war. The U.S. counters by announcing any war against South Korea will be considered in Washington as a war against the United States.

But what is Kim Il Sun to do? Before his untimely death, Kim Il Sun put into motion a series of events that would change the face of the Korean Peninsula for all time. Now it is up to his son, who has to not only marshal the forces to carry out his late father's plan, but solidify his own tenuous position as the new North Korean dictator. The very future of the fatherland is at stake, as well as the last real bastion of active communism in the world.

Sun Il Kim starts the clock on Operation Sword Point which is to take place during his absence. While on a state trip to Beijing and Moscow to drum up support for his regime in North Korea and keep the other power grabbers at bay, several Generals and Admirals who were loyal to Kim Il Sun and now support his son, initiate the clever plot. Feint in the south and east, attack U.S. warships and air patrols, draw Washington's attention away from the north where special commandos invade Vladivostok to steal a Russian nuclear ballistic submarine. Once at sea, the boomer is to launch nuclear missiles against the south to bring the ROK puppet government to its knees. With a firm belief that the U.S. will not enter into a nuclear war over South Korea, Operation Sword Point is begun.

A U.S. warplane is shot down over the Sea of Japan in an unprovoked attack, then a major air battle is engaged in between North Korean MiGs and carrier-based F-14s and F/A-18s, while missile boats attack a Marine Expeditionary Unit conducting landing drills with the ROK off South Korean shores.

The might of the U.S. Navy is severely tested in this all-out diversion meant to keep attention away from the stolen Delta IV submarine, but an American Los Angeles-class attack sub on patrol in the northern Sea of Japan stumbles onto the theft and is assigned to sink the boomer before it launches.

The story reaches its climax in a daring air and submarine battle that takes place in the bay of Kimch'aek in North Korean waters as the White House, Moscow, and P'yongyang battle politically for the safety of all South Korea and, ultimately, the world.