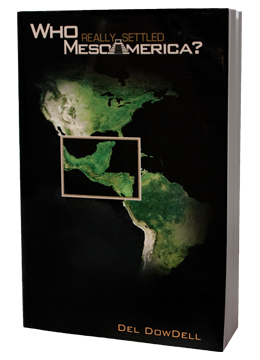 As thoroughly documented in "Lehi Never Saw Mesoamerica," since the Nephite Land of Promise was located in the Andean area of South America, this second, follow-up book answers the question, "With Lehi landing in South America, who then left the ruins in Mexico, Belize, the Yucatan and Guatemala?"

This volume also answers the follow-up question, "Since the Olmecs of Vera Cruz, Mexico were not the precursors of the Jaredites, where did Jared and his people land if not in Mesoamerica?" These questions, seldom, if ever asked by others, are at the heart of the geographical setting of the Nephite Nation. Many members of the Church, almost all LDS and BYU archaeologists, and all of Maxwell Institute (FARMS) and FAIR, and other ancient studies groups involved in this work, believe that Mesoamerica was the landing site of the Lehi Colony, and of the Jaradites long before them.

However, a careful study of the sciences, and especially the 1828 meaning of the words Nephi left us, and the brief account of the Jaredites, the wind and sea currents, and climate, soils and other factors, as suggested in scripture simply cannot be satisfied by Mesoamerica. This second work covers more of the message Nephite prophets and Ether left us regarding the settlement of the Western Hemisphere, and provides an exciting and insightful glance at the world of the Jaradites, their trek to the Great Sea and the oceans they crossed in submersible barges (and what exactly they were) in order to reach their land of promise, and where that land of promise was located.

Open these pages and see what descriptions and clues not only Nephi, but Mormon and Moroni left us that are rarely discused by Mesoamerican and other location Theorists.
$34.99