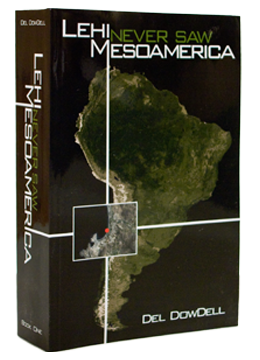 For those who are truly interested in the geography of where the scriptural record tells us Lehi landed, and where the Nephites built their nation, this book is a must! Dispelling the fallacies inherent in the Mesoamerica and also the Great Lakes theories from comparison with the actual statements of Nephi, Jacob, Mormon and Moroni, this book, using only Nephi's words, traces his description of their travel to the Land of Promise, and shows through scientific means, exactly where they sailed and where their ship "driven forth before the wind" landed, and what they found there.

The promotion of a falsehood that Lehi landed in Mesoamerica, or even the Great Lakes, has swept far and wide. However, a careful reading of Nephi's record points out that very few Mesoamerican areas, and none of the Great Lakes areas, really agree with the descriptions or clues Nephi provided us.

To find Lehi's "Land of Promise," it is essential that one does not begin with a place already in mind, as Mesoamerican, Great Lakes, and almost all Theorists have done. Nor should one decide on following a single point of view, such as the location of the hill Cumorah. Instead, one need only study with careful diligence the many descriptions and clues Nephi left of his "driven forth before the wind toward the promised land," and where those winds and sea currents would have taken him. It is amazing how many plain and simple descriptiions Nephi, Mormon and others left us about the land of promise and its location.

Open these pages and see what descriptions and clues Nephi, Jacob, Mormon and Moroni left us that are rarely, if ever, discused by Mesoamerican, Great Lakes, or other Theorists, and actually see what Nephi really said about the where he landed and what was found there.
$34.99